The Physics Of Cheerleading 
One of the main principles behind the physics of cheerleading is setting up good weight distribution in the stunts, such as pyramids. The pyramids are created by putting a greater number of people at the bottom than at the top. The stronger (and usually heavier) team members form the support base at the bottom while the lighter team members are at the top. This enables greater ease in performing stunts that involve holding the chearleaders up (at the top of the pyramid), and tossing them into the air. 
The picture above is a great example of how the weight is distributed evenly among the team members. If you look closely at the picture, you'll see that the two cheerleaders in the middle of the pyramid are each supporting half the cheerleader's weight at the top. And at the bottom of the pyramid there are six team members, all supporting the three girls in the middle and top of the pyramid. Therefore, each team member at the bottom is holding approximately half a cheerleader's weight. Therefore, the weight is distributed evenly among all the team members who are involved in supporting the weight. It's clear that good weight distribution (and how to achieve it), is one of the main areas of focus in the physics of cheerleading.


Some of the more advanced stunts involve tossing the cheerleaders into the air, and them doing flips and twists while airborne. This can incorporate some gymnastics skills as well, which adds a dynamic component to cheerleading physics. The figure below shows a stunt in which the cheerleaders are thrown up and into a twist. 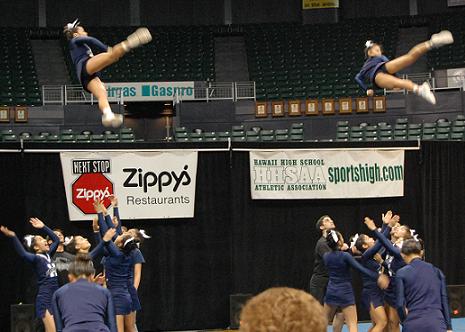 
This concludes the discussion on cheerleading physics.