The purpose of this page is to provide an overview of how airplanes fly. The study of flight is actually a vast subject in the field of aerodynamics which reaches far beyond what is discussed here. The study of flight combines wind tunnel testing, similarity scaling principles, analytical modeling, computational fluid dynamics (CFD), and empirical test data found in charts and tables. Nevertheless, this page will at least help you to conceptualize the basic principles of how airplanes fly, and will be a useful resource for the beginner.

Airplanes are constructed such that the airflow pattern around them generates lift, thereby enabling them to fly. The airflow in turn is produced by the forward motion of the plane relative to the air. This forward motion is produced by engine thrust, delivered by way of propeller engines or air-breathing engines (turbines). Airplane engines produce thrust by accelerating the airflow in the rearward direction. This backwards acceleration of the airflow exerts a "push" force on the airplane in the opposite direction, by Newton's third law, causing the airplane to move forward.

In the next section we will discuss airfoils.

In aerodynamics, airplane wings are called airfoils. They have a cambered shape which enables them to produce lift, even for angles of attack (α) equal to zero. The figure below shows a cross-sectional view of an airfoil, with nomenclature shown.


The orientation of the airfoil relative to the airplane body is shown below. The angle of incidence is defined as the angle between the chord line and the longitudinal axis of the plane. For general aviation designs, an angle of incidence commonly used is about 6 degrees. 
The figure below shows airflow over an airfoil.

The presence of air friction (viscosity) is what allows an airfoil to generate lift. The reasoning behind this is complicated and involves rather complex mathematics. But basically, the air flow pattern around an airfoil results in the lower half of the airfoil experiencing greater pressure force than the top half of the airfoil. As a result, a lift force is generated. This is perhaps the least understood, and most asked, aspect of how airplanes fly.

In the next section we will discuss in greater detail the forces acting on an airplane during flight.

Forces Acting On An Airplane

The figure below shows the resultant forces acting on an airplane in level flight, moving at constant velocity. An airplane undergoing takeoff, or landing, experiences similar forces acting on it. The figure below shows the typical forces acting on an airplane during takeoff. Note that the lift force (L) is defined as perpendicular to the velocity (V) of the plane relative to the air. The drag force (D) is defined as parallel to the velocity (V). As one would expect, the thrust force (T) is in the same direction as (V). The weight (W) of the plane points straight down in the direction of gravity. Now, W = mg, where m is the mass of the plane and g is the acceleration due to gravity, where g = 9.8 m/s2. 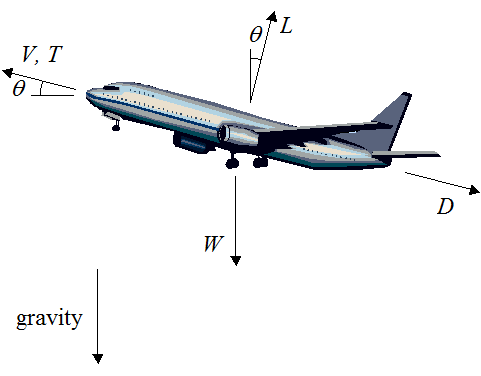 In the next section we will discuss how airplanes adjust their attitude and flight path.

Airplanes control their navigation path and attitude (orientation relative to the direction of air flow) by adjusting physical elements on the outside of the airplane, elements which modify the airflow pattern around the plane, causing the plane to adjust its attitude and flight path. These physical elements are called control surfaces and consist of ailerons, elevators, rudders, spoilers, flaps, and slats. Adjusting a plane's flight path always involves either pitching, rolling, or yawing, or a combination of these. The figure below illustrates what these are. For example, let's say a plane is to go around a horizontal turn. For a plane to make a turn its body orientation must be tilted (roll) such that the resulting aerodynamic forces enable the plane to go around a turn. Lateral forces enabling a turn are only possible by tilting the airplane such that the lift force (L) has a lateral component needed to balance the centripetal acceleration produced during the turn. The figure below illustrates this. We can analyze this as follows.

By Newton's second law, the force balance for the centripetal acceleration, in the lateral direction, is given by

where θ is the bank angle, m is the mass of the plane, V is the velocity of the plane (normal to the page) with respect to ground, and R is the radius of the turn.

The force balance in the vertical direction is given by

Combine the above two equations to give the radius of the turn. We have

Another example of a situation where flight path needs to be adjusted occurs if there is a wind blowing in a direction different from the direction the pilot want to go, with respect to ground. For example, let's say there is a lateral wind blowing, which results in the plane being "carried" in the direction of the wind. And let's further say that the pilot want to fly straight ahead. To compensate for the wind, the pilot must fly at a certain angle relative to the air such that the plane's flight with respect to ground is in the desired direction. The figure below illustrates this. Using vector addition we can construct the following vector diagram. The angle Φ and the velocity Vp must be selected such that the resultant velocity vector Vr is in the desired direction.

On a related note, planes will often fly in high altitude jet streams. These are fast flowing air currents. A plane can be "carried" by a jet stream and as a result dramatically reduce flight time if the jet stream is flowing in the intended direction of travel. Of further benefit, high altitude flight also reduces the drag force since air has much lower density at high altitude. To understand this consider the drag force equation: D = (1/2)CρAv2, where C is the drag coefficient, ρ is the density of the air through which the airplane is moving, A is the projected cross-sectional area of the airplane body perpendicular to the flow direction (that is, perpendicular to v), and v is the speed of the airplane relative to the air. As you can see, drag force is proportional to density, and lower drag force results in greater fuel efficiency since less engine thrust is needed to overcome the drag force.

Next we will discuss supersonic flight.

Virtually all commercial aircraft fly at subsonic speeds, which are speeds (relative to the air) less than the speed of sound (which is approximately 340 m/s). As a result, such aircraft have aerodynamic design suitable for these speeds. For example, the airfoil shapes shown previously are designed for subsonic flight.

In supersonic flight, the aircraft speed relative to the air is greater than the speed of sound. This requires a significant difference in aerodynamic design from that of aircraft flying at subsonic speeds. The basic reason for this is that air carries "information" in the form of pressure waves at a certain speed (i.e. the speed of sound), which varies with air temperature, and air density. These pressure waves are due to the physical movement of objects in contact with the air.

For an object moving at supersonic speeds, the air upstream of the object cannot react quickly enough to adjust for the presence of the object as it moves through the air. As a result, air "piles up" against the object in a violent and sudden manner. This results in the formation of shock waves, which is heard as a sonic boom. The presence of these shock waves necessitate a different wing design than that used for aircraft flying at subsonic speeds. Typically, supersonic wing designs have a delta shape, which create sufficient lift, while also weakening the shock waves, and as a result this reduces the drag force. The figure below shows a top view of a jet experiencing shock waves during supersonic flight speed. The figure shows what typical shock waves might look like, coming off the front tip and the wing tips. Shock waves are an important part of the physics of how airplanes fly, at supersonic speeds. Delta wing designs must also be suitable for subsonic flight since takeoff, landing, and occasional cruising speeds, are subsonic.

Lastly, we will discuss hypersonic flight.

For aircraft flying at hypersonic speeds, which are usually defined as speeds greater than Mach 5 (5 times the speed of sound), significant problems can arise due to extreme heating of the aircraft body caused by the intense frictional dissipation of air within the boundary layer on the aircraft surface. The space shuttle, during re-entry into the earth's atmosphere, travels at about Mach 25 which is why its design (delta wing shape), attitude, and flight path must be such that surface heating is minimized. Failure to do this will result in the shuttle burning up during re-entry.

During re-entry the space shuttle adjusts its angle of attack (α) so that it becomes a "blunt body" with respect to the air flow. This is shown in the figure below. The large angle of attack creates a large drag force, which in the case of the shuttle is ideal because it must slow down a great deal before landing. On the other hand, a small angle of attack will reduce the drag force but result in much higher heating of the shuttle body. We can deduce from this that sustained hypersonic flight is only feasible for very high altitudes above the earth's atmosphere, where there is virtually no air resistance. For flight within the earth's atmosphere, we wish to keep the drag force as low as possible, for fuel efficiency, and heating of the aircraft body as low as possible. For both of these criteria to be possible the maximum flight speed of an aircraft must be less than hypersonic speed.